Kebab or Kabob, Doner Kebab in the U.S

Kebab or Kabob, Doner Kebab in the U.S

Kebab or Kabob, Doner Kebab in the U.S (donerG)

When you walk into a food store and order a skewered dish, what name do you call it? Kebab or kabob?  Does the difference in name infer different methods of preparation? The truth is, both kebab and kabob are correct. But a closer study shows that there are even more names to identify this skewered dish.

Let’s go back in time a bit to understand the name-changing journey of this delectable skewered delicacy. Arguably, the first people to make skewered meat popular were the Turks.

After the day’s long and arduous journey, Turkish merchants would set up a fire under the glittering star and roast lamb meat which they called kebap. The practice of smoking meat over fire then spread on with every new mouth that tasted the sumptuous dish. And until today, kebab stores in the US such as donerG credit their tasty kebab recipes to the Turks.

Through the decades, the original name, kebap, has undergone alterations. Many have different names for it, such as kabob, kebab,  kabab, kephav, kebob, kibob, etc.

It’s just like the spelling differences in the unit for measuring length. Americans say meter while people from the UK prefer meter.

So when next you work into a nearby donerG store and ask for a kebab or kabob, we know you’re right and will serve your skewered dish with whatever assortments you desire.

Where Did Doner Kebab Originate from? 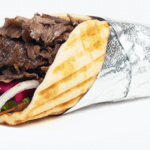 Doner kebab is a skewered meal made with ancient culinary Turkish recipes served in every donerG store.

The process involves grilling seasoned meat on a vertical broiler allowing for even heat distribution and easy oil drip-off.

Although the ancient recipe calls for lamb meat, at donerG stores, you can choose from a host of meat variations such as lamb, pork, veal, chicken, etc.

Not only can you decide what kind of meat you want in your doner kebab, but you also have numerous spicy sauces, tasty flavors, and healthy greens you can pick to savor with your kebab.

How Can I order a Doner Kebab? 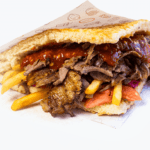 You can either opt for a pick-up at any donerG store near you or you can choose to have it delivered to your location. Whatever your choice, rest assured that your doner kebab will be hot and yummy when you get it.

For over 25 years at donerG, we have catered to the nutritional needs of different customers from all walks of life.

We understand that these customers have specific preferences, and we do our best to meet them. Consequently, we only sell kosher meat to any customer who requests halal doner kebab.

We also have sumptuous vegetarian recipes for veggies.

Can I Make a Large Doner Kebab Order? 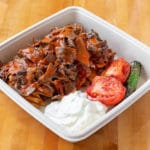 Since our meals are prepared with your likes and tastes in mind, you can count on donerG’s catering services for all your culinary events. Whether it’s a housewarming party, dinner party, or even office meals. Our competent staff capacity allows us to cater to groups of people within the range of 100-1500.

You can check our menu right now and start to enjoy your doner kebab alongside numerous Turkish delights with friends and family.